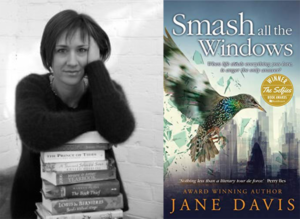 My two best freelance gigs are at the Alliance of Independent Authors and at Publishers Weekly because they both give me the the opportunity to grab some wisdom from authors. I get paid to interview them, and there’s nothing better than that. This one is from self-published author Jane Davis. One of her editors is a guy I greatly admire for many reasons, my co-host when I do the News Update podcast for ALLi once a month, Dan Holloway.

Jane, though, is one of the few rock stars of the indie publishing world. She was recently recognized as one of the best self-published authors of the year with the new Selfie awards for her book called Smash All The Windows, which is also smashing all the preconceptions many people have about self published books. Smash all the Windows is based on a real disaster in a football stadium in 1989. In our interview, Jane discusses how fiction can help humanize big disasters, placing them in perspective while assigning what she calls “unblame.”

Click the “play” button below for the 10-minute interview, where she’ll explain what she means.

If you enjoyed this, please send positive reinforcement