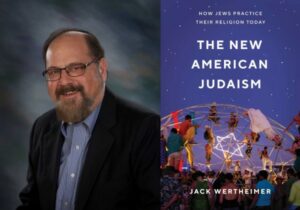 In an article for Publishers Weekly, I asked Jack Wertheimer, author of The New American Judaism: How Jews Practice Their Religion Today, whether the current rise in anti-Semitism is leading to increased Jewish religious involvement. His answer did not make the final edit in my piece, but here’s what he said about how anti-Semitism impacts the American Jewish future.

“Synagogues have served as gathering places at times of stress and Jews who otherwise might not attend on a Friday night or a Sabbath morning do attend when there’s some major crisis. Does that translate into ongoing Jewish religious involvement? I haven’t seen evidence of that.”

He may be right, but Wertheimer was measuring specifically Jewish religious involvement and not this feeling of cultural solidarity that the rise in anti-Semitism has created between Jews. Most religious Jews dismiss “cultural Judaism” as not sustainable. I am not so certain.

My complicated relationship with Judaism is handled in my memoir-in-progress, but I’m searching for how others connect. And I’ve interviewed many Jewish thinkers over the years, and most of them say that this notion of Judaism without God or synagogue is not sustainable. I’ve been told this by rabbis of all denominations for 35 years. Yet cultural Judaism endures.

As for synagogue-based Judaism, Wertheimer seems more positive, since Jews previously on the fringes have been forcing synagogues to change and adapt for them. I know I’m a little out of date, but I remember how attending B’nai Jeshurun on New York’s Upper West Side was almost akin to going to a Broadway show. I’ll have more to say about “BJ” later, since it appears in my memoir, but here’s a link to my full feature on Jack Wertheimer.

The American Jewish Future May Be Found in the Margins

Pinning down how Jews in the United States practice their religion can be tricky, since there are so many ways they define themselves. So, is there a way to corral the disparate pieces into a full picture of American Jews? Professor of American Jewish History at the Jewish Theological Seminary Jack Wertheimer says there is, and it’s precisely this diversity and constant state of innovation that gives him some hope in a future for U.S. Jewry. More here.

Or, you can read the unedited, 1,140-word version at this link from my old Patreon page, which goes a bit more into Wertheimer’s thoughts on whether the current rise in anti-Semitism is bringing American Jews back into synagogues. He also talks about Tikkun Olam as a phenomenon among progressive Jews and whether that translates into Jewish religious commitment. You might be surprised by his answers. More here.