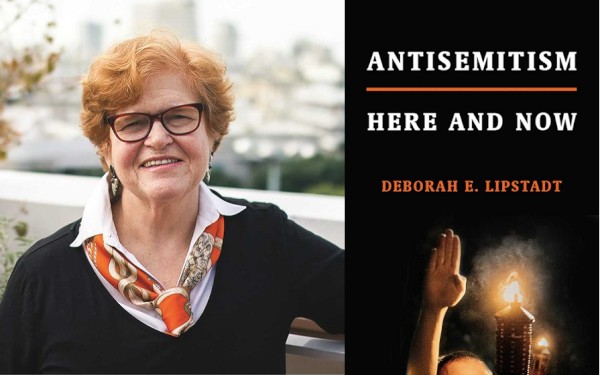 I learned a great deal from my Publishers Weekly interview with Holocaust scholar Deborah Lipstadt. When I talked to her, it was just before the 2019 Women’s March, and Jews were trying to decide whether to ignore the antisemitism of the movement’s leaders and attend, or skip the march entirely. Deborah was strongly on the side of not attending.
She was promoting her latest book, Antisemitism: Here and Now. We talked about why this ancient hatred is rearing its ugly head again, and how antisemitism is like herpes. “I think of antisemitism as the herpes in society; it keeps asserting itself at times of tension, at times of dislocation, and that’s one of the reasons we’re seeing it.”

Most of all, though, Deborah connected the dots in many ways for me on how anti-Semitism is the world’s oldest conspiracy theory. The Holocaust scholar helped me realize that there is fundamentally, no difference between “left wing” and “right wing” antisemitism, since they all draw upon the same mythology of secret Jewish power, money, control, and dual loyalties. This is why if Israel went away or if Zionism never existed, so-called “left-wing anti-Semitism” would still be around. Anti-Zionism is the excuse, the drawing-room and academic-conference respectability the antisemitism virus feeds upon. But it could always find something else
Deborah also allowed me to use the entire interview in my Emet – Truth podcast. I begin with my own first antisemitic experience from my early childhood in Georgia. Then Deborah and I discuss a range of topics, from the Women’s March to Alice Walker to the roots of antisemitism and what we can do about it.
You can read my Publishers Weekly interview with Deborah Lipstadt here, or click on the arrow below for the full half-hour interview.

Listen to the Podcast