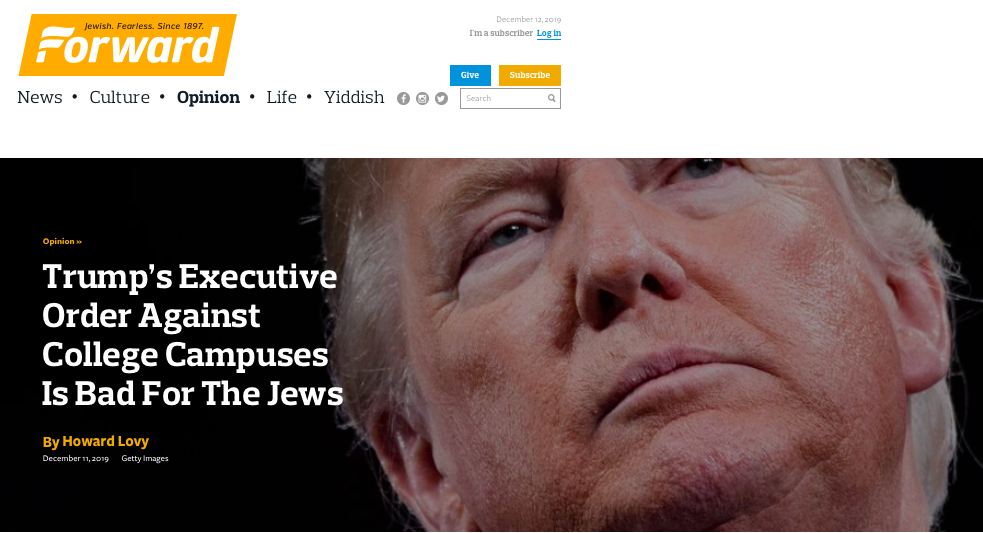 The Jewish Daily Forward asked me to write a commentary on Trump’s executive order designed to combat college anti-Semitism. My piece was not so much about the (as it turned out, misreported by the NYT) proposal that Jews be defined as a nationality rather than religion. It has more to do with why, exactly, Trump is so nice to Israel. It has nothing to do with such an insignificant voting block as Jews, who don’t support him, anyway. You can read all about it in my Forward Op-Ed here.

But that’s not what I want to talk about in this post. I want to include below one reason why I am paying close attention to the issue of campus anti-Semitism masquerading as anti-Zionism. I experienced it myself in college. The paragraphs below are the parts that were cut from my original too-long draft of my Forward commentary. I’m not complaining. It was beside the point and the editor was right to cut it. But here’s the personal part of the story:

At the risk of revealing how ancient I am, let me tell a brief story about what happened to me in 1985. When I applied for editor of my student newspaper, The South End, at Wayne State University in Detroit, hundreds of Arab students turned out at a hearing to denounce me … one by one … because of my commentaries about Israel. I stood there, stone-faced, while I was denounced for not being “objective” about the Israeli/Palestinian conflict for the simple reason that I was Jewish and did not call for the destruction of Israel.

This was more than just a disagreement over Israeli policy. I felt a gut punch every time another speaker, who did not know me at all, denounced me. At the time, there was nobody I could turn to for support. I remember well the sense of isolation, this horrible feeling in my stomach that this had nothing whatsoever to do with Mideast politics. I was targeted because I was an outspoken Jew. I was more than qualified for the job. I had been writing for the paper, living and breathing for the paper, for the previous two years. But the Student Newspaper Publication Board decided I was “too controversial” after the protests. My application was rejected.

That was in the mid-’80s, and the problem has become exponentially worse. So, yes, I understand that Jewish students need to be protected from anti-Semitism. It seems that all you have to do is claim you’re anti-Israel at any university campus, and you can get away with targeted harassment, even violence, against Jewish students or visitors.

Believe it or not, Jewish students will survive college. The story ended well for me. One story the Arab student body complained about was my coverage of the Muslim Student Association’s sale, in the student center, of the Protocols of the Elders of Zion. I suggested in my coverage that it was, in fact, an anti-Semitic forgery. Strangely, my coverage of the issue would earn me an internship at The Detroit Jewish News and my unexpected later career as a Jewish journalist. It would lead, eventually, to the managing editor’s office at JTA in the early 2000s, when I put into practice many of the lessons I learned in my mini-Mideast wars in college

The way to combat anti-Semitism on campus is to continue to host speakers of all points of view and change minds the old-fashioned way. Make sure students are safe, of course, but college is where you are allowed to be loudly, boldly wrong along the way toward adulthood.