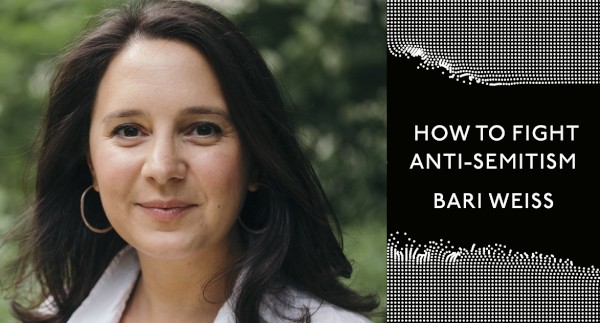 I recently wrote a feature for Publishers Weekly after my interview with Bari Weiss about her book, How to Fight Anti-Semitism. While I really enjoy my gig with PW for letting me go out and interview some fascinating Jewish authors for their religion section, sometimes I have to leave great material on the cutting-room floor. The most-important part of the story that did not make it into the piece was Bari’s assertion that tracking anti-Semitism is not just about the Jews. Anti-Semitism is a bellwether for a dying society. For that reason, we all should be paying attention to the rise in anti-Semitism—all of us, Jews and non-Jews. Below is a transcript of my interview with Bari Weiss.

Howard Lovy: You have a connection to The Tree of Life Synagogue. Tell me about the connection.

Bari Weiss: Yeah, so, as I write in the book, I was Bat Mitzvahed in 1997 at Tree of Life. We’re promiscuous, religiously, and my parents pay dues at several synagogues, and that’s one of them. The beauty of Pittsburgh is that we’re really small enough and close to each other enough that we’re really not separated along denominational or political lines in the way that happens in a big city like New York or LA.

Tree of Life became home to three different congregations. There’s a lot happening there on a given Shabbat morning. My dad often goes there, so when I heard the news I was actually in Phoenix because I was giving a speech the next day to a Jewish group. My immediate thought was “Please, God, I hope my dad is not there.”

I was supposed to have been on a flight to Israel the next day for a reporting trip, but it became very clear to me that there was nowhere else I could be in the world that week. So I changed my flight, I came home to Pittsburgh, and I just sort of spent the week bearing witness to my community. And, of course, to what the killer did, but also the way that the Jewish community and the broader Pittsburgh community responded.  I don’t know if I’ve had a more transformative week in my life.

I was supposed to have written a broader culture book, which I’ll turn to after I’m done being on the road for this one. But in in the ten months following, I found myself again and again drawn to writing about this topic and felt like there was nothing else that I needed to write. I went back to my publisher and basically begged.

Howard: There are a lot of books coming out about anti-Semitism now. I recently interviewed Deborah Lipstadt about her book. What made you also decide to say, “well okay I’ll write about anti-Semitism, but also how to fight it.” Where does that come from?

Bari: I think that if you even take a cursory look at history, it’s clear that societies in which anti-Semitism flourishes are societies that are dying or dead. One of the reasons I think it’s so important to a expose the nature of the new anti-Semitism is not just for the sake of the Jewish people, or not even primarily for the Jewish people, but for the sake of this country. Societies in which anti-Semitism thrives are societies in which truth has given way to conspiracy thinking. I think it’s clear that we’re living through a moment in which our grasp of truth is just very, very tenuous, and in moments of deep uncertainty and anger people reach for anti-Semitism. I think that’s what we’re seeing here. So, the reason I want to fight it, I hope it’s obvious.

About Omar and Tlaib

Howard: I almost felt like I was reading recent headlines as I went through your book. Had your deadline been a couple weeks later, there might have been other things in the book, too, so at some point you have to you have to cut it off.

Bari: Exactly. I mean, at a certain point, because there was just so much unfolding as the book was in copyediting and I really felt the need to address Trump attacking members of Congress, saying that they needed to go back to the places they came from, you know to the crime-infested countries from which they came. That, to me, was just such an obvious reappropriation of the idea of provisional belonging that has been weaponized so often against the Jews. I was very happy to get that in, but of course had it closed a few weeks later, there would have been a whole other story about Bibi barring Ilhan Omar and Rashida Tlaib from visiting Israel. And this bullying request of Trump.

But also, and this is I think is very important that I point out in the book, that someone can be both a target of bigots and racists and lunatics, as Ilhan Omar and Rashida Tlaib are, and they can also believe deeply disturbing things themselves. I think we saw the perfect encapsulation of that this week with the fact that they were being barred from visiting the democratic State of Israel, that Israel was barring democratically elected members of Congress. Then when you look deeper into the trip they had planned to Palestine, as they called it, it was being sponsored or underwritten or connected with a group that has literally republished medieval Christian blood libel, not to mention glorified suicide bombers. You know, only one of those stories was told.

Howard: I think a lot of progressives are worried about being labeled as white supremacist and at the same time there’s a problem on the other side, too. There’s this question over is Trump an anti-Semite or does he just encourage anti-Semites. But I think Jews on social media are having a hard time trying to explain themselves and not doing a very good job of it. I guess maybe this is where we transition to the “how to fight it” part. Do we need to have to, with every tweet, with every Facebook post, explain the last seventy years of history?

Howard: Well, seventy in the context of Israel. There are a lot of short memories about things like that. You wrote in your book, “Call it out especially when it’s hard.”

Bari: Right. I think that there’s just a tremendous amount of misunderstanding about what anti-Semitism is and I hope it will clear that up for people.

Bari: I don’t think it’s different in its ultimate form. I’ll say that I think that they look different in the sense that—and I’ll give you what I think is the perfect example, which is that organization I mentioned that was going to sponsor Rashida Tlaib and Ilhan Omar’s trip that was canceled. They republished a medieval blood libel that was originally written by national Vanguard, which is a neo-Nazi group, and they repurposed it, as you know, on their anti-Zionist site and billed themselves as an initiative for the promotion of global dialogue and democracy. I think that is such a powerful example.

Anti-Semitism from the right announces itself without hesitation. You know, it’s the Pittsburgh killer who screams “kill the Jews.” It’s Hamas, it’s Iran, you know it’s the guy that was arrested yesterday in Ohio—you know, whatever his name is. But anti-Semitism, when it comes from the left, often cloaks itself in language that is very seductive not just to progressives but especially to progressive Jews that want to see themselves on the right side of history. It cloaks itself in the language of social justice and liberation and all the rest. So, sometimes I think, because of that clothing it wears, it’s a little bit harder to see.

Where I agree with you is that the roots of it are, of course, the same and the conclusions of it are the same; the packaging of it often looks really different. So that’s why I structured the book the way I did.

Howard: It sounds to me like even Jews who are hardly religious or never really felt Jewish before are feeling more Jewish now because of anti-Semitism.

Bari: They are, and I think that’s always the case when you’re a minority, or if any person is under attack, it’s like a punch to the gut and there is a very emotional reaction to that. The question is can we make use of that by revisiting our Judaism and our Jewish identity. By learning Hebrew, which is the common language of our people that so many people don’t know. After this book tour—and I know I should be fluent at this point, given the amount of education I’ve had—but I’m terrible at languages. One of my goals for myself is to learn Hebrew, like really being much more fluent in it.

So I think that we’re in a precarious moment, but in a way really a moment with tremendous potential and opportunity.

I’ll say that my dad was talking to this really incredible man who lives in Pittsburgh. He was a partisan and a Holocaust survivor and was asking about my book. He said to my dad: “There’s a very simple answer to how to fight anti-Semitism. It’s called ‘be a better Jew.’” And I think that there’s a lot of wisdom in that.

Howard: You mentioned “allow for the possibility of change” and you give the example of Supreme Court Justice Hugo Black, who was a member of the KKK, but ended up one of the greatest justices. Is that what we should be doing now? I mean, should we look at someone like, well Louis Farrakhan is beyond redemption, but other people who can be changed and educated?

Bari: First of all, I think it is an anti-Jewish idea to suggest that anyone is irredeemable. I think that it’s always possible. Do I think that Louis Farrakhan has revealed himself? There’s a long history of him showing us who he is. Is it possible? I just I always want to hold on to the possibility of change. I wouldn’t be in the business that I’m in if I didn’t think we could change people.

Howard: That’s a good answer. I think one of the last pieces of advice you give is not only to nurture your Jewish identity, but to tell your own story and I think that’s probably what you’re doing with this book.

Bari: Yeah, I think that’s a big part of what I’m doing, but I think what I’m trying to do— and I sort of leave bread crumbs throughout the book for people to go and Google and read more about because it’s a short book and I needed to be pretty economical. And people tend to read short things. But I hope I’m leaving bread crumbs for people to go and understand more deeply their own history.

I feel like one of the amazing parts about the American Jewish experience is that we’ve sort of forgotten a bit of our history and maybe who we are. I think that revisiting where we come from can be enough. The long history of anti-Jewish pogroms and everything else, you know I think that’s one part of it, we are but also an incredible civilization with world-changing ideas. I don’t think Jews have a sense of that and I really hope that they will come away with more appreciation and, frankly, pride in it.