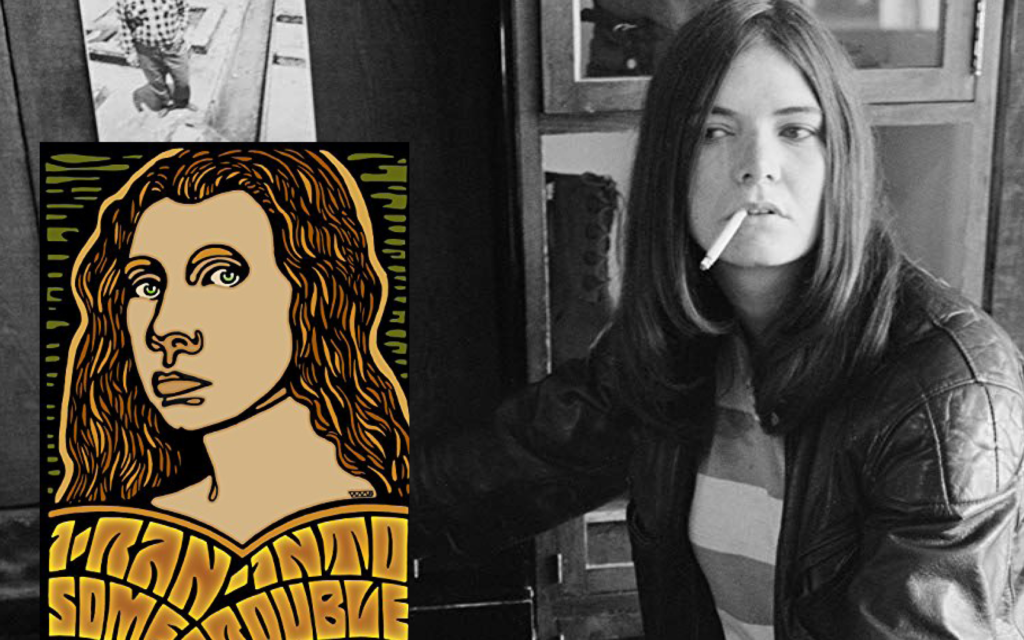 I’m proud of my work on a book by Peggy Caserta about Janis Joplin, heroin, the ’60s, and survival. I’m happy to have been Peggy’s editor on I Ran Into Some Trouble. I spent a bit of time interviewing her extensively when I edited this book for Wyatt-MacKenzie Publishing.

She’s a great lady who has lived an incredible life. Speaking gently, with a Louisiana lilt, she told me some amazing stories that I am happy to have helped her write. She is in her late 70s or early 80s now, and is just as badass as ever.

Her memoir is about her time with Janis, and as a shop owner in Haight-Ashbury during the late ’60s and adventures with The Grateful Dead, Jimi Hendrix, and others. There is a dark side, too. She did heroin with Janis and struggled with addiction through the ’70s and ’80s. She finally returned home to Louisiana to take care of her mother with Alzheimer’s.

Below are some of the marketing notes I made for Nancy Cleary, publisher at Wyatt-MacKenzie. Many of the passages were ghostwritten by me after extensive interviews with Peggy. 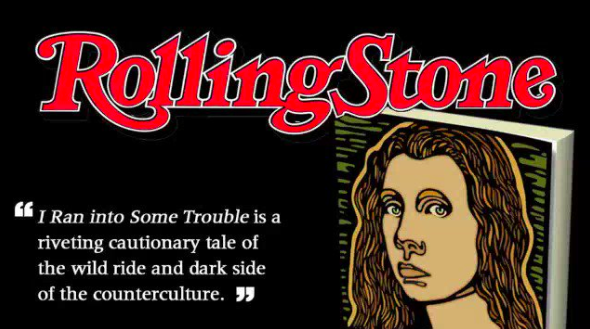 The story of a generation

The story of Peggy Caserta mirrors the story of her generation: First, there was the hope and endless possibilities of the Haight-Ashbury scene in 1960s San Francisco, where she was not only a participant, but a trendsetter through her shop that catered to rock stars, including a then-unknown Janis Joplin, who plunked down 50 cents for a layaway plan on a pair of genes. As Janis Joplin’s friend and lover, and outfitter to bands like The Grateful Dead and musicians like Jimi Hendrix, Peggy Caserta was a central figure in the colorful, creative trip embarked upon by her generation.

The little-known sides of Janis Joplin

Through Peggy Caserta’s eyes, we see how Janis Joplin lived both with joy and with insecurity over her beauty and talent. Peggy was there for Janis, as a lover, as a friend, and as a fellow heroin junkie. Then, the 1970s came, and with it came a decade of despair and darkness. First, there was Janis Joplin’s tragic death, which Peggy asserts was not the result of a heroin overdose. But that was not the end of Peggy’s journey. If anything, it had just begun. From the euphoria of Woodstock to the ravages of heroin addiction and prison, then back home to take care of her mother, this is a story of a generation as seen through the eyes of a unique witness to history.

But this is also a story about business: In her Haight-Ashbury days, she seemed to be the only grownup in the room, making it as a businesswoman and helping to bankroll some of the most-iconic music, fashions, and trends of the time. Everybody else was tuning in and dropping out, but she was very much aware, and bankrolling it. She writes: “I was being hit up for all kinds of things at that time: finance bands, get Jimi Hendrix a job, buy Jerry Garcia an amp, the list went on.”

Peggy’s story is one about losing and gaining control: Peggy endures an abusive relationship, feels like an outcast because she’s a lesbian in a very heterosexual, male-dominated hippie culture, and endures the ultimate loss of control: Rape. For a decade or so, heroin, in a strange way, was the only thing in her life she could control. She surrenders to heroin as the path of least resistance, maybe, but it also helped her control when and how she feels pain.

The cliche is that her generation rejected their parents, got out of their little towns, and never looked back. They were rebelling against their parents, creating a generation gap. Not Peggy, though. She stays in touch with her mother, who remains a very active character in her life, sewing clothes, loaning money, urging her to get off heroin, from the beginning to the end. Her mother, in fact, has done so much for her that she moves back to Louisiana to help her through her final years of dementia. Peggy’s story begins with her mother and ends with her mother.

A lot of writers have interviewed me, or tried to interview me. Most of them bring their own ideas about who I am, or who they imagine I am. But Howard actually listens to what I say and really gets my voice and what I am all about. — Peggy Caserta, Author of I Ran Into Some Trouble

I found an empty storefront about 35 to 40 feet off the corner of Ashbury, at 1510 Haight. Without any trouble, I rented it for $87.50 a month. Scary, but exciting. Later, many people would marvel at how smart I was for picking that spot at that time, but really I didn’t know that much. I was looking for cheap rent and was just tripping along Haight Street, saw the place, and never really focused on the fact that it was right off the corner of Ashbury. Haight and Ashbury meant nothing at the time.

I was being hit up for all kinds of things at that time: finance bands, get Jimi Hendrix a job, buy Jerry Garcia an amp, the list went on. Sensing my disinterest and not being one to take no for an answer, Sam said, “I’m gonna do this and I’d like for you to do it with me, but if you won’t, I’m gonna do it anyway.” The next thing he said was, “Can I borrow fifteen hundred dollars?”
“For what?”
“I want to build a temple, a Hare Krishna temple.”

… on her mother’s contributions to fashion:

“Mom never quite understood that she’d started a counterculture fashion trend from her little sewing room in Covington, Louisiana. Later, I tried to tell her that. I said, “Mom, you have no idea how the clothes you made helped define the look of an entire generation.” Many iconic ‘60s fashion trends were born in from my mom’s sewing room, traveled to my shop in Haight-Ashbury, then moved on to the rest of the world.”

When she began, slowly at first in that distinctive Janis Joplin voice, singing “Bye … bye … bye … baby, bye bye,” I about fell out of my chair and the hair stood up on my arms. I gasped and thought, “Oh my God.” I knew at that moment there was something truly unusual about this girl across the street, that it was so raw and so real. I don’t want to be trite, because that’s been said about her my many others before, but when I saw her she wasn’t famous, yet that’s what hit my mind. I thought. “My God, something’s different here.” Her soul was just pouring out of her mouth—so much so that I turned to the people next to me to see if they were getting what I was getting.

… on Shooting Heroin with Janis Joplin

As Janis was performing the ritual of cooking it up in a spoon, drawing the heroin up in a needle, I would sit there, getting very worked up, turned on. Janis would embrace my arm with her purple velvet tie, slap my vein, look at me with that lovely, silly impish smile she had, then penetrate me with the needle, sending a spasm of warmth through my arm and all over my body. Then Janis would do it to herself and we’d fall over together. This was more than just a ritual for the senses. Heroin was a pure, true expression of our love. In those moments, we threw away our pain and gave one another our hearts.

… on escape from abuse

I kept thinking that each time I suffered abuse at the hands of Kimmie would be the last time, because she would always be so sorry, as abusers often are. “I’m Sorry, I’m sorry, I don’t know why I did that. It’ll never happen again.” But it does. I just kept thinking that it would get better, but I realized that it would not.
I could see that I was going to be the recipient of physical abuse forever. And when I began to pull away from Kimmie, Janis was right there to pull me in—Janis and heroin. These were to be my escape from Kimmie, my way of controlling my life again.

… on how she got to Woodstock

“You gotta come,” Janis told me on the phone.
“I can’t. I’m working,” I replied.
“You can stop working,” she said. “Please come.”
“Janis, I’ve seen it on the news. I can’t get through all those people.” The New Jersey Turnpike was backed up, bogged down, and impossible to navigate. Then I blurted out what I thought would be a joke. “The only way I’d go is if I were airlifted in,” I said.
There was silence. Just enough silence to make me wonder if Janis got the joke. Then she said, “OK. I’ll airlift you in.”

… on the aftermath, and blame.

For years, many people held me responsible for Janis’s death. They called me an “enabler,” despite the fact that it was Janis who introduced me to heroin and not the other way around. But the deeper problem was with a peculiar blindness among the hippies. They were a very heterosexual movement. It was kind of unusual that I was the only known lesbian in that entire mix of people. Some in Janis’s entourage did not like me for that, did not like me for my friendship with her, and they did everything they could to get her away from me. It took me years to get over their blame, but I know that I was never the catalyst for her death.

… on her near-death experience

It must have been around dawn when I came to, since the sky was starting to turn that purple color, when there are no clouds and you know the day will be lit with blue skies. As I opened my eyes, I saw nothing but stars and purple. It looked like the sky of another world. I could feel wind, like I was flying through this purple, starry haze.

Oh God, I’m dead. I overdosed. Oh. My. God. I did it, I overdosed. My poor parents! And I’m flying through the sky. But before the fact of my death sunk in, my first thought, my first feeling, was of my parents, my sweet loving parents. They would soon know that their only child died of an overdose, died a junkie, and her body thrown unceremoniously into a cow pasture in Mexico.

“Peggy Caserta, you are remanded to the custody of the California Department of Corrections for a period not to exceed seven years.”
The flesh, blood and bones that held my knees in a locked position seemed to liquefy. I thought I was going to fall, or faint, and I grabbed onto my lawyer’s jacket to keep from hitting the floor.
“Did she just say seven years?”

“C’mon mother! If that tree breaks through, this wind is gonna snatch us up and blow us into the next county! You ever heard of Dorothy and Toto?”
I got mother and Cody situated in the bathtub and leaned the mattress up so it was tipped against the side of the tub. Angel kept circling until I got her into the whirlpool.
Mother protested, “Peggy, I’ve nevah done this in all my life. Nevah!”
“Well, you nevah been in a hurricane like this either, have you?” I shot back.

… on coming home to her mother.

As she lost her faculties, I tried to just love her more. It’s odd, how life works in circles—how I wound up, back home on the bayou, finally got my head straightened out, as Mom began to lose hers.

Confessions of an Actress, by Meredith Patterson

By Howard Lovy 2 years ago

By Howard Lovy 2 years ago