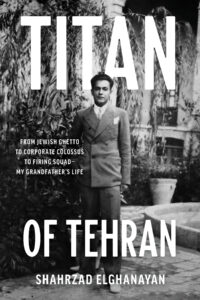 The Jewish Telegraphic Agency ran a feature I wrote about the granddaughter of an Iranian Jewish leader who was executed in the 1979 Islamic Revolution.

As a news photo editor currently with NBC News, Shahrzad Elghanayan has worked with many photojournalists whose instinct is to run toward danger. It is, she said, “a sign of courage, empathy, and feeling responsible for your fellow human beings.”

That instinct is part of what connects Elghanayan with her grandfather, Tehran businessman Habib Elghanian, who was the head of the Jewish Association of Iran until he was executed during the country’s Islamic revolution in 1979. There were so many times when Habib, at the time Iran’s most prominent secular Jewish leader, could have saved himself – but chose instead to stay in Iran helping Jews.

“He stayed there to protect the Jewish community he had led since 1959 and what he had built from scratch,” Elghanayan said. “I can understand that.”

In her book “Titan of Tehran: From Jewish Ghetto to Corporate Colossus to Firing Squad — My Grandfather’s Life,” published by the Associated Press in November, Elghanayan not only researched her grandfather’s death, but also celebrated his life.

Read the rest of my story on Elghanayan at the Jewish Telegraphic Agency or in the Jerusalem Post.

Read more of my Jewish News and Commentary here.

Ben-Dror Yemini On How To Fight Media Bias

Self-Publishing News Podcast with Dan Holloway and Me