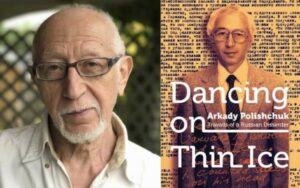 Arkady Polishchuk, a former Soviet Jewish Refusnik, reminds me of my grandfather, with his Old World sense of irony and humor, mixed with the slight pathos of age and long suffering.

I first came into contact with Arkady when I interviewed him for this Publishers Weekly feature I wrote about him when he released his previous book, Dancing on Thin Ice: Travails of a Russian Dissenter (Doppelhouse Press, July 2018). I was impressed not only by the depth and breadth of his experiences as a witness to history, but the compelling way in which he tells the stories of his life—with both wit and wisdom.

I was privileged to have received an early draft of a few chapters of his next book, As I Was Burying Comrade Stalin. Again, he not only made history come alive through excellent storytelling, he presents this history from a unique perspective. There are very few living people who can relate this story of life under communist rule—first being taught to worship Stalin, then slowly, as he came of age, realizing that he had been lied to all his life. We are there with him, experiencing these historic moments from Arkady’s point of view.

Arkady and I have corresponded a great deal since then. I hope to be his editor for when he finds a publisher for Comrade Stalin. He’s a great guy to talk to. Humble, but with a sharp wit.

Meanwhile, please enjoy this feature I wrote about Arkady for Publishers Weekly.

A Jewish Refusnik Who Fights for Evangelical Rights? Only in Russia

How did a Soviet Jewish Refusnik, raised an atheist communist, come to be a powerful voice on behalf of Russian evangelical Christians? No, this isn’t one of those “walked into a bar” jokes. It’s a true story of Cold War bravery and danger told in Dancing on Thin Ice: Travails of a Russian Dissenter(Doppelhouse Press, July) by Arkady Polishchuk.

You can also read more of my Publishers Weekly work here.