This is a kind of memory of a memory. It is my grandfather’s childhood accounts of a Hungarian pogrom and other anti-Jewish violence and blood libel. Longreads says this takes 17 minutes to read. For slow readers like me, longer. It took about 100 years to write, from the time my grandfather experienced it then told it to my brothers and me. It’s part of a memoir I’m writing about my grandfather, Judaism, and other ghosts.

By the way, I was looking for historical references to the Hungarian pogrom described by my grandfather. I found it in the American Jewish Year Book. These disturbing accounts were of anti-Jewish violence well before the Holocaust. These were post-WWI. Click for a closer look. 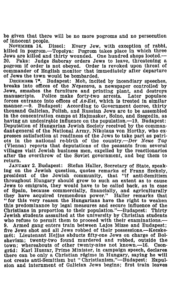 There is much to unpack in the excerpt, from Hungarian pogroms to my grandfather’s memory of family and the town in which he grew up, to an actual instance of blood libel. In future posts, I’ll explain more about what my grandfather witnessed.

On the banks of the Danube, there is a place where the great river takes two sharp 45-degree turns, making it difficult for ships to pass unseen. For centuries, this feature made the city, nestled within, a fortification against foreign attack. But from an enemy inside the city’s own boundaries, there was no natural protection. And for a 9-year-old boy, hiding as his neighbors ransacked his grandparents’ home, a wine barrel was the only shelter. There he hid, silent, while around him echoed the muffled, angry, anguished sounds of a pogrom.