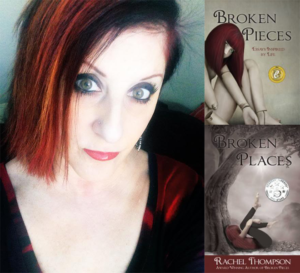 Rachel Thompson is an author and book marketing expert. Her series of books, Broken Pieces and Broken Places, about coming to terms with sexual abuse she suffered as a child, has inspired many other survivors to come out of hiding and seek help. In this episode, Rachel talks about the abuse, but also how writing the books and helping others brought healing after almost a lifetime of guilt and trauma. Her books and online forums, including her Twitter forum #SexAbuseChat, have been an inspiration to many other trauma survivors.

On how she began writing about her childhood sexual abuse trauma: “Something like a death of somebody very close to you, or who used to be very close to you … can be a turning point in any person’s life, particularly for a writer, because we carry so much in our heart and in our brains that at some point we just need to get it out.”

On readers’ reaction to her first ‘Broken‘ book: “The response was overwhelming. People came to me from all over the world, emailing me DMing me, PMing me, with their own stories of being sexually abused. But they didn’t want to tell anybody else. They didn’t want to share it publicly, but I constantly was asked, ‘Can you create some kind of forum where we could get together and talk about it?”

It began as IndieVoices, when I was executive editor at Foreword Reviews, and is now called Inspirational Indie Authors in its incarnation for the Alliance of Independent Authors. But no matter what it’s called, I enjoy making these podcasts because I get to interview some incredibly brilliant authors. Listen to some of my other audio interviews with indie authors.

Working With a Developmental Book Editor

TwitterChat: How to Work With a Developmental Editor